Providing your puppy or dog with an indoor kennel crate can satisfy many dogs’ need for a den-like enclosure. Besides being an effective housebreaking tool (because it takes advantage of the dog’s natural reluctance to soil its sleeping place), it can also help to reduce separation anxiety, to prevent destructive behavior (such as chewing furniture), to keep a puppy away from potentially dangerous household items (i.e., poisons, electrical wires, etc.), and to serve as a mobile indoor dog house which can be moved from room to room whenever necessary. A kennel crate also serves as a travel cabin for you dog when travelling by car or plane. Additionally, most hotels which accept dogs on their premises require them to be crated while in the room to prevent damage to hotel furniture and rugs. Most dogs which have been introduced to the kennel crate while still young grow up to prefer their crate to rest in or “hang-out” in. Therefore a crate (or any other area of confinement) should NEVER be used for the purpose of punishment. We recommend that you provide a kennel crate throughout your dog’s lifetime. Some crates allow for the removal of the door once it is no longer necessary for the purpose of training. The crate can be placed under a table, or a table top can be put on top of it to make it both unobtrusive and useful.

Preparing the Crate Vari-Kennel type: Take the crate apart, removing the screws, the top and the door. Allow your pup to go in and out of the bottom half of the crate before attaching the top half. This stage can require anywhere from several hours to a few days. This step can be omitted in the case of a young puppy who accepts crating right away.

Wire Mesh type: Tie the crate door back so that it stays open without moving or shutting closed. If the crate comes with a floor pan, place a piece of cardboard or a towel between the floor (or crate bottom) and the floor pan in order to keep it from rattling.

Furnishing Your Puppy’s Crate Toys and Treats: Place your puppy’s favorite toys and dog treats at the far end opposite the door opening. These toys may include the “Tuffy”, “Billy”, “Kong”, “Nylabone” or a ball. Toys and bails should always be inedible and large enough to prevent their being swallowed. Any fragmented toys should be removed to prevent choking and internal obstruction. You may also place a sterilized marrow bone filled with cheese or dog treats in the crate.

Water: A small hamster-type water dispenser with ice water should be attached to the crate if your puppy is to be confined for more than two hours in the crate.

Bedding: Place a towel or blanket inside the crate to create a soft, comfortable bed for the puppy. If the puppy chews the towel, remove it to prevent the pup from swallowing or choking on the pieces. Although most puppies prefer lying on soft bedding, some may prefer to rest on a hard, flat surface, and may push the towel to one end of the crate to avoid it. If the puppy urinates on the towel, remove bedding until the pup no longer eliminates in the crate.

Location of Crate Whenever possible, place the crate near or next to you when you are home. This will encourage the pup to go inside it without his feeling lonely or isolated when you go out. A central room in the apartment (i.e.: living room or kitchen) or a large hallway near the entrance is a good place to crate your puppy.

Introducing the Crate to Your Puppy

In order that your puppy associate his/her kennel crate with comfort, security and enjoyment, please follow these guidelines:

A Note About Crating Puppies
Puppies under 4 months of age have little bladder or sphincter control. Puppies under 3 months have even less. Very young puppies under 9 weeks should not be crated, as they need to eliminate very frequently (usually 8-12 times or more daily).

Note: Puppies purchased in pet stores, or puppies which were kept solely in small cages or other similar enclosures at a young age (between approximately 7 and 16 weeks of age), may be considerably harder to housebreak using the crate training method due to their having been forced to eliminate in their sleeping area during this formative stage of development. This is the time when most puppies are learning to eliminate outside their sleeping area. Confining them with their waste products retards the housebreaking process, and this problem can continue throughout a dog’s adult life.

Accidents In The Crate

If your puppy messes in his crate while you are out, do not punish him upon your return. Simply wash out the crate using a pet odor neutralizer (such as Nature’s Miracle, Nilodor, or Outright).

Do not use ammonia-based products, as their odor resembles urine and may draw your dog back to urinate in the same spot again.

NOTE: Except for overnight, neither puppies nor dogs should be crated for more than 5 hours at a time. (6 hours maximum!)

The Crate As Punishment
NEVER use the crate as a form of punishment or reprimand for your puppy or dog. This simply causes the dog to fear and resent the crate. If correctly introduced to his crate, your puppy should be happy to go into his crate at any time. You may however use the crate as a brief time-out for your puppy as a way of discouraging nipping or excessive rowdiness. [NOTE: Sufficient daily exercize is important for healthy puppies and dogs. Regular daily walks should be offered as soon as a puppy is fully immunized. Backyard exercize is not enough!]

Children And The Crate
Do not allow children to play in your dog’s crate or to handle your dog while he/she is in the crate. The crate is your dog’s private sanctuary. His/her rights to privacy should always be respected.

Barking In The Crate
In most cases a pup who cries incessantly in his crate has either been crated too soon (without taking the proper steps as outlined above) or is suffering from separation anxiety and is anxious about being left alone. Some pups may simply under exercised. Others may not have enough attention paid them. Some breeds of dog may be particularly vocal (e.g., Miniature Pinchers, Mini Schnauzers, and other frisky terrier types). These dogs may need the “Alternate Method of Confining Your Dog”, along with increasing the amount of exercise and play your dog receives daily.

When Not To Use A Crate

Do not crate your puppy or dog if:

Where to buy a crate: Crates can be purchased through most pet supply outlets, through pet mail order catalogs and through most professional breeders.

he Cost of A Crate
Crates can cost between $35 and $150 depending on the size and the type of crate and the source.

The Cost of Not Buying a Crate

The cost of not using a crate:

The real cost, however, is your dog’s safety and your peace of mind.

Alternative Method Of Confining Your Puppy
There are alternative methods to crating very young puppies and puppies who must be left alone in the house for lengths of time exceeding the recommended maximum duration of confinement (see Crating Duration Guidelines). We suggest the following: Use a small to medium-sized room space such as a kitchen, large bathroom or hallway with non- porous floor. Set up the crate on one end, the food and water a few feet away, and some newspaper (approx. 2’x3′ to 3’x3′) using a 3 to 4 layer thickness, several feet away. Confine your puppy to this room or area using a 3 ft. high, safety-approved child’s gate rather than shutting off the opening by a solid door. Your pup will feel less isolated if it can see out beyond its immediate place of confinement. Puppy proof the area by removing any dangerous objects or substances. By Robin Kovary, with Barbara Giella Please see: “How to Successfully Housetrain Your Puppy”

next post: How to get help with your vet bills

Our Clinic is now open! 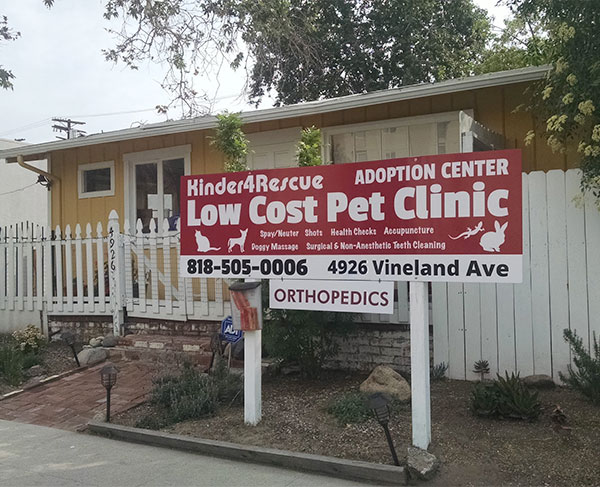